← Travelling corner: My bella Italia
What are the main benefits of a bilingual upbringing? (3) →

We’ve all been there.  We are trying to speak a new language and sometimes we forget a word and try to make it up, or we misunderstand, or we just get a bit mixed up and say the wrong thing.  Language mistakes can be embarrassing, but they can be funny, too!  Usually the people you are speaking to don’t mind and they probably find it endearing! 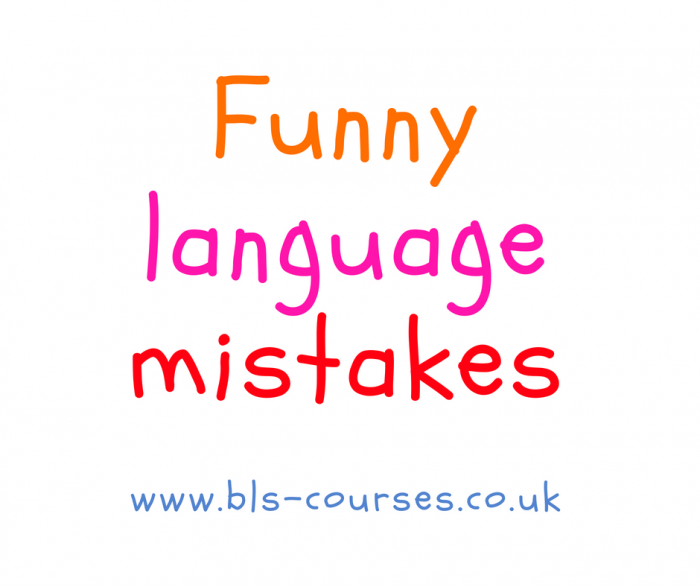 What kinds of mistakes can you make?  Sometimes it’s because a word is difficult to pronounce and you end up saying another word that is funny or even rude.  I remember being told by a Brazilian friend to be careful when asking for coconut – “coco” – because if I pronounced it wrong I would end up saying “cocô” – what children say when they are learning to become potty trained!

Some words in other languages look like words in English but they do not always have the same meaning.  It is easy to say the wrong thing by accident and it can sometimes be embarrassing.  That word is a case in point, because if you tell someone you are “embarazada” in Spanish, hoping to tell them that you are embarrassed, what you have actually told them is that you are pregnant.  If you ask people to come and assist you with organising an event in France, by saying “venez assister à mon evenement”, you will actually find that they don’t turn up until you have done it all and just watch – “assister à” in French means “to watch” or “to observe” (or even “to witness” – if you’re telling someone “j’ai assisté à un crime”, luckily it means you witnessed it rather than you committed it!).  Still on the subject of crime, if you say something is a “delikt” in Polish, it doesn’t mean it is a delight, it means it is a tort or wrongdoing.

It’s not always about false friends, though.  You might be tripped up by words that look or sound similar or are near homophones (words that sound the same but have different meanings, like “knew” and “new”).  Here is one to watch out for in French: imagine you wanted to meet someone at the hotel, “Je vais vous rencontrer à l’hôtel”, but you struggle with the closed “o” of “hôtel” and you actually say “Je vais vous rencontrer à l’autel” – “I’ll meet you at the altar” – instead! You might get a funny look, at least – or perhaps a very enthusiastic response! (From: https://www.qlanguage.com.hk/foreign-language-faux-pas/) Something similar happened to a friend of mine.  My friend had rented a gîte in France and was having trouble getting the gas hob to work so she went to ask her neighbour for help.  It turned out that the gas had been switched off so her neighbour rang the supplier to get it switched back on.  My friend wanted to thank her neighbour by saying “merci, Monsieur, vous êtes très gentil” – “thank you, sir, you are very kind” – but she couldn’t quite remember the word and ended up saying “vous êtes très joli” – “you are very pretty” – instead.  He just smiled.

You can also hear things wrong.  I was once asked in Italian if I was “scoraggiata”, “discouraged” or “disheartened” but I thought I had been asked if I had done something else, “scorreggiato” (look it up!) – which I hotly denied, of course!

If you are lucky enough to speak a few languages you might get them mixed up, or try to guess what a word is based on your knowledge of another, similar language.  A friend of mine was on holiday in Italy and wanted to compliment the chef on a cake she had eaten.  She knew that “gâteau” meant “cake” in French and so tried to think of a similar word in Italian that she thought meant the same thing.  She told him “il gatto è buonissimo”, which actually means “the cat is very tasty” (the correct word for “cake” in Italian is “torta”, which is actually like another French word, “tarte” (“tart” or “torte” in English).  If only she’d chosen that one!

Here are the best funny language mistakes I’ve heard from what people have shared on the internet: French faux pas https://www.frenchentree.com/living-in-france/learn-french/faux-pas-in-french/, a mixed bag http://www.rosettastone.co.uk/blog/6-most-funny-and-embarrassing-language-mistakes/ and some that users themselves have shared https://forum.duolingo.com/comment/10989895/Your-funniest-mistakes-in-language-learning

Have you made any funny language mistakes? Share them in the comments!