← Saint-Petersburg Locals’ choice (part 2)
I moved to Russia with my family for 6 months. Interview with BLS Russian Tutor, Natalia →

My Long Weekend in Montolieu Book Village – A Booklover’s Paradise

Montolieu is a charming village in the Aude département of France – half an hour’s drive from World Heritage Site, Carcassonne.  The utopian brainchild of bookbinder Michel Braibant, since 1989, Montolieu has been known as the “Village du livre”, or Book Village.  This village of 800 inhabitants boasts more than 10 independent, second-hand bookshops, a bookmaking museum and numerous art galleries and jewellery/curiosity shops too.  It is also located in a beautiful setting, with the Provencal countryside very close by and a river running beneath the village that visitors can sit by and swim in at their leisure! 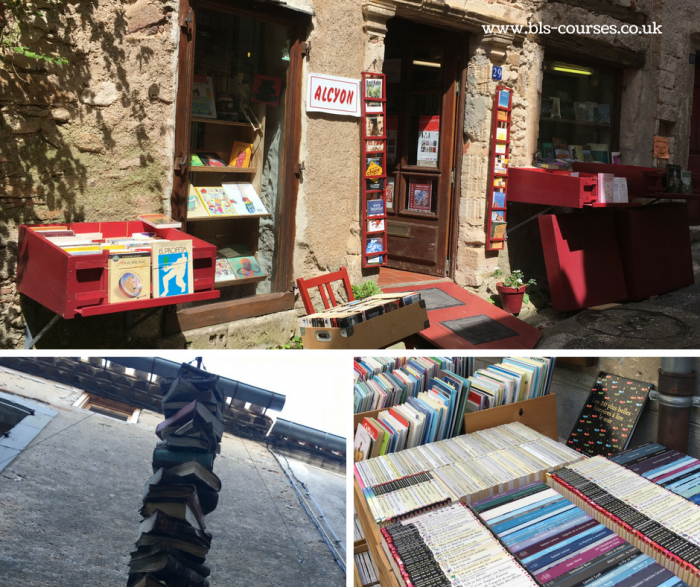 Intended as a way to reverse the decline of this small village in the South of France, the Book Village idea has created a thriving tourist attraction that also hosts literary events – conferences, authors’ visits, exhibitions, lectures, book fairs, children’s literary workshops and an educational book trail.  Since 1991, over 50 buildings have been renovated and many have been turned into accommodation for the 52,000 tourists that visit every year.  The old paper mill has also been brought back into use and there are several artists and bookmakers in the village.

I spent a long weekend there very recently and wanted to share my thoughts on the village with you and perhaps inspire you to visit this wonder of French creativity that can also be a great place to practise your language skills (reading and speaking) if you are learning French.

I found that the village’s many bookshops are all very well-stocked and sell everything from collectors’ editions of La Fontaine’s Fables to pocket editions of the most famous (and not-so-famous) French authors.  There are antiquarian and new books, non-fiction and fiction books, children’s books, comic books, novels and more.  Most of the works on sale are in French but there are also a fair amount of books in other languages, mainly English, and occasionally Spanish or other languages too.  The booksellers take pride in their work and only choose the best books but they are all very reasonably priced.  They are also happy to chat about their books, or books in general, so it is a good opportunity to practise speaking French.  A lot of the booksellers speak good English as well as French, so even if you are not learning French, you can talk to the shop owners and likely find a book you like too – you might even get a recommendation. 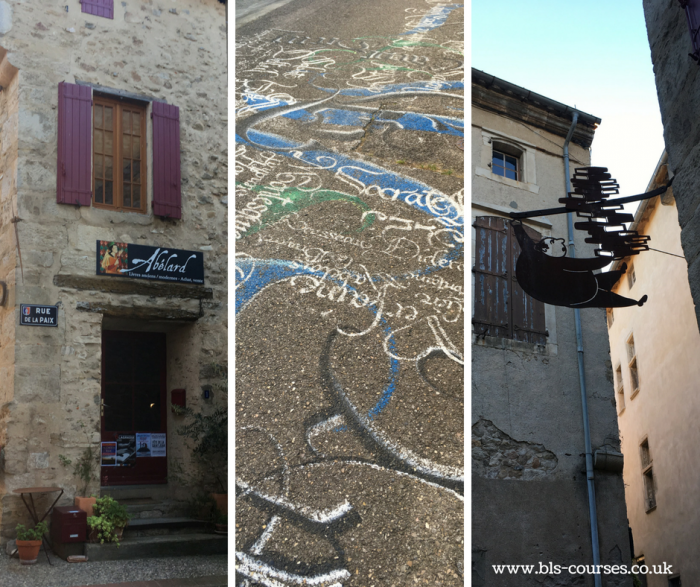 The atmosphere in Montolieu is very relaxed and jovial, and everyone is happy to have a chat and will at the very least say “Bonjour” as you pass by.  The village is also very cosmopolitan; I was told that 25 different nationalities are represented among the residents.

Lots to see and do

The bookmaking museum (to give it its full title, the “museum of bookmaking as an art and a profession”) is worth a visit as it explains the history of bookmaking and celebrates the beauty and charm of books and reading.

I went to Montolieu at the end of June, which is a very busy time of year because there are several festivals going on that everyone can participate in for free (or almost free).  While I was there, I went to the “Fête de la Musique” (music festival) on 21st June, where there are street concerts and music in almost every venue; the “Fête de la St Jean” (Saint John’s Fête) which consisted of a huge plate of paella, music from a brilliant brass band, fireworks and dancing on the local sports field, all for €15; a “vide-grenier” or car-boot sale in the middle of the village and a book launch in one of the restaurants, followed by wine-tasting and nibbles.  I was told that there are events on all through the year, so you don’t have to go in June to join in the festivities; in nearby Carcassonne for the whole of the month of July there are three nightly concerts, two of which are free and which attract big names like Sting, Elton John, Simple Minds and Beth Ditto to name but a few.  Then, in August there is the Montolieu village fête, three days of non-stop music that goes on well into the night.

I stayed at the lovely Maison de Mallast guest house, which has several princely rooms in the 18th-century French style and a garden restaurant where they serve fish and chips at the weekend.  There are also numerous other hotels and guest houses to choose from, in and out of the town centre. 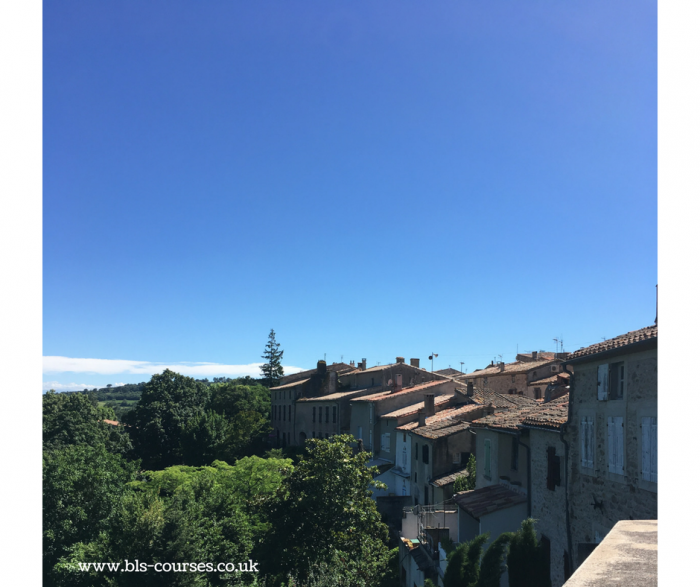 Around Montolieu, the places to visit are Carcassonne and other beautiful French towns, Saissac and St-Denis.  We did not hire a car this time (the taxi from the airport was €35) but we would like to go back and hire one next time to have the freedom to travel around (although there was such a lot to do in Montolieu that we did not need to go anywhere else for the 4 days we were there).

All in all, my trip to Montolieu was both enjoyable and educational as I learnt more about bookmaking and brought a few French books home to keep me going.

Montolieu is not the only Book Town in Europe – two others that are nearby are Redu in Belgium and Hay on Wye in Wales (the first ever Book Town) that are also a must for booklovers and served as inspiration for Michel Braibant when he came up with the idea for Montolieu Book Village.