← I moved to Russia with my family for 6 months. Interview with BLS Russian Tutor, Natalia
Travelling corner: My bella Italia →

Have you ever considered going on a safari? From the moment you disclose this plan, you are faced with the recurring question of whether you aim to see the big five or not.  Interestingly, once you are on the safari, the focus seems to change. Now the question is: “Did you manage to see any lions”. Obviously, I was massively impressed when I saw lions, but, more importantly, I felt relieved. Now this important box had been ticked, I could fully concentrate on watching out for my true favourite – the giraffe. I love giraffes! 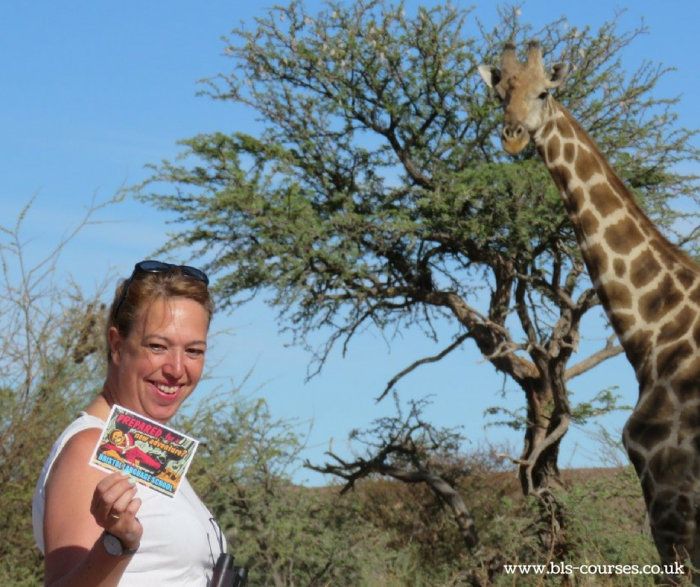 My admiration of giraffes as ‘cute animals’ was not shared by a local South African though. “Giraffes are not cute. They are big. We don’t say ‘cute’ for big animals!” Even for my German ears a rather forthright answer. No offence taken though!  This warning remark could not in the least lessen my excitement about our upcoming tour: We would drive though a game park where visitors are allowed to leave the car and roam freely. Super cool! Soon after entering the park, we were lucky and came across a group of giraffes. Wow!!! They are so beautiful, elegant, and majestic. I was in awe. After a few minutes of watching them, I finally recalled that leaving the car was allowed. So I took my chance and walked up to the giraffes. I was sure they would eventually run off, so I approached slowly, dreaming of the chance of touching them – maybe?  They did not run away though. And, while getting ever closer, realisation dawned on me that, actually, they are not cute after all but rather BIG animals indeed! I even noticed that they were not exactly amused with me approaching.

How did my little adventure end? With some quite agitated giraffes, an increasingly nervous husband – taking pictures of the scene(!) – and myself rushing back to the safety of our car. Prefer a safer kind of adventure? Why not study a language at BLS?