Some weeks ago we were talking in class about the cities called Santiago in the world, such as Santiago de Cuba, Santiago de Chile and Santiago de Compostela (Spain). All of them have something in common: the Spanish language. For the sake of geographical proximity, although unknown to me, I will focus on the last one: Santiago de Compostela. The main reason why people know the city is because of Santiago’s pilgrimage route, known as Camino de Santiago, which runs along the north of Spain and has been walked for centuries. It takes between one and two months during which we can explore new places, enjoy the breathtaking landscapes, meet interesting people, discover new flavors and realize what we are capable. During the class conversation appeared the title of a film, The Way, an American and Spanish co-production, directed by Emilio Estévez and starring Martin Sheen. 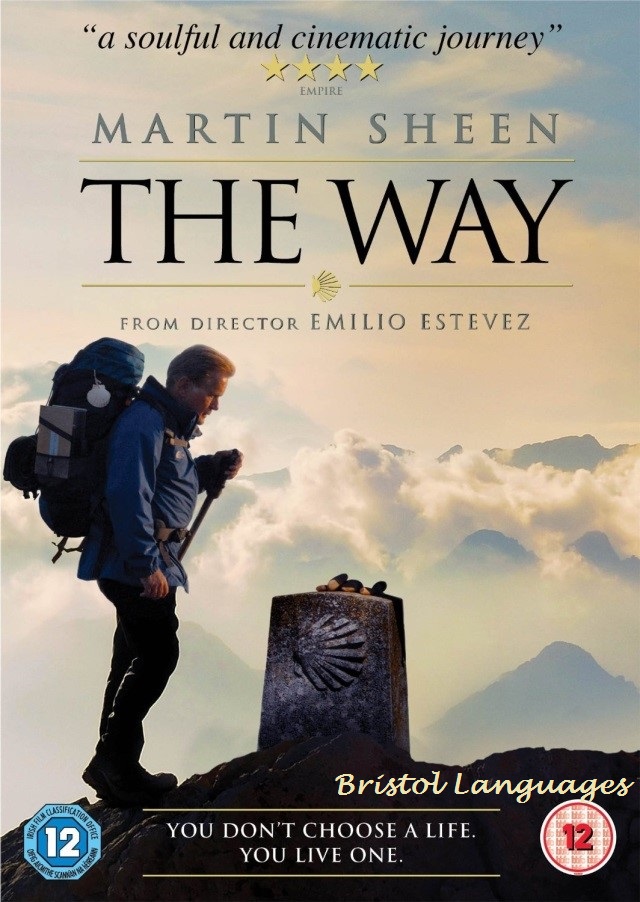 The protagonist, Tom Avery, is a widowed ophthalmologist, who finds out that his son, Daniel, has died at the beginning of the route in the French Pyrenees. The relationship between the father and son wasn’t very close, because the first didn’t understand the lifestyle of his offspring. The last time they spoke on the phone, just before the journey, the son told him: “you don’t choose a life, you live one”. After the news of his son’s tragic death, Tom travels to France to collect the remains, and there he decides to walk the route with Daniel, each in a different world.

The film is not characterized by action scenes or sudden plot twists, but it concentrates on some Spanish topics, such as bulls, gypsies and typical foods like pinchos. The main characters are an Irishman who walks the way to lose weight, a Canadian woman who hides the fact that her husband was abusive and seems to have the purpose of quitting smoking and a writer looking for inspiration for his next book. At first, Tom shows no interest in making friends, not even engaging in conversations with fellow travelers. He only thinks of reaching the goal and scattering his son’s ashes along the way until they arrive to Galicia. There, having completed his journey, he releases the rest of the ashes into the Cantabrian Sea. He also puts his son’s name on the completion certificate awarded to each pilgrim in Santiago.

Besides the beautiful landscapes of northern Spain, several debates are presented in the film. What is the reason to begin the journey to Santiago de Compostela? Some people do it for religious reasons, others to find inspiration or as a means of meditation, others do it just for the challenge or to experience something different. Some even do the journey with a banal reason to quit smoking or to lose weight. Unlike the original travelers who used to make the journey with no help, nowadays many people choose to complete the pilgrimage on bike or use the help of modern technology. I think that the Camino should be a time to disconnect from everything to allow us to refocus on what it is important in life.

From my perspective, I think every day there are fewer people who have faith and belief in God. I would like to travel these sandy paths, crossing the refreshing rivers, but mostly I would like to have a suitable environment for meditation to regain the faith I lost some time ago. It is incredible how as the years pass, the religious origins are lost, forgotten, yet we keep the traditions and festivities. In my opinion we should be more concerned with the origins and reasons of celebrations, to understand better our roots and direct the society toward fellowship, kindness, empathy and understanding.

I cannot comment about the experience yet, but I can say the film made me even more interested to arrive in front of the Cathedral of Santiago de Compostela having found my inner peace, sticking my victory flag in the Galician land.