← Travelling Corner: 5 Ideas for Short-Distance Walks in Bristol (Part 1)
Book review: The Journey. The Fine Art of Travelling by Train. →

1. What is Babel Magazine, who writes it and who is your audience?

Babel magazine was set up by Lesley Jeffries and Dan McIntyre, two linguists at the University of Huddersfield. Lesley and Dan found it strange that the newsagent’s shelves had magazines for subjects such as history and geography, but nothing that covers linguistics. They knew that many people – not just linguistics professors! – are interested in all sorts of things to do with language, and decided that they ought to do something about it. Babel is a quarterly magazine for both linguists and those with a general interest in languages and linguistics, based on new research but interesting and accessible for all. (You can watch an animated take on the origins of Babel magazine here).
Each issue is written by many linguistic researchers from far and wide – this helps us make sure that we cover a wide range of topics, from the secret language of gay men in the 1950s, to the future of translation through new technology. But we also write Babel’s regular features ourselves – Lesley and Dan write the entries for our Linguistic Lexicon, and our editorial staff – Jane Lugea, Matt Evans and Hazel Price – put everything together and handle Language in the News. 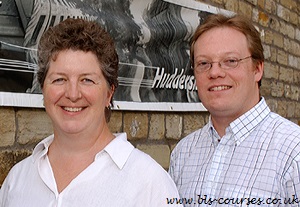 2. How do you decide on the content? Do you receive letters from the readers? Do you consult specialists/academics?

We have been very lucky – we have had a constant stream of contributions coming in from linguists around the world from ever since our first issue (which you can read for free). We are looking forward to publishing new articles that we have been sent on topics such as adverbs, the language of comedy and marketplace metaphors.
Sometimes we put a call out for specialists – for example, Twitter was very handy for assembling a team of contributors for our recent special issue on the pioneering linguist Ferdinand de Saussure. We also accept readers’ requests! Our regular Ask a Linguist feature addresses readers’ burning linguistic questions, and if readers suggest a topic, then we’ll try to find a linguist to write an article on it.

3. Can you tell us more about the Babel Young Writers Competition?

Our Young Writers’ Competition is our way of recognising the writing talents of young linguists. Each year, we run two categories – one for sixth form/college students, and one for undergraduates – and the winner of each is published in our November issue (as well as receiving a year’s free subscription to Babel).
The competition was inspired by an article we received out of the blue. We were stunned to find that the writer of this wonderful piece on British Sign Language was a seventeen year-old linguist, Kateryna Pavlyuk. This made us think that perhaps there were more great young writers on language out there, and so we set up the competition. So far our winners have looked at diverse topics: Konglish (a blend of Korean and English), the status of Arabic and English in Lebanon, and what spoonerisms (‘bunny rabbit’ / ‘runny babbit’) can tell us about how language works. We are currently carrying out the difficult task of picking our 2016 winners, which will be published in our next issue (No 17). Readers can read each of our previous winners on the Babel website. 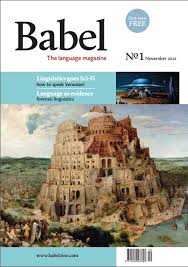 4. Do you organise any events, such as meetings with researchers, linguists or writers?

Yes – at the moment, the highlight of the Babel calendar is our annual lecture. We set up the Babel Lecture in 2015 as a way to meet our readers, bring expert linguists’ thoughts to the public, and also as an excuse for a good night out!
Our first Babel lecturer was the accent and dialect coach Brendan Gunn, who gave a talk about the important role of linguistics in helping actors such as Brad Pitt, Penelope Cruz and Robert De Niro to sound convincing in their parts. Then, in May this year, David Crystal lectured on intonation in English, drawing on anecdotes from his many years as a linguist to show how intonation plays such an important role in creating meaning. We are hoping to bag another big name for our 2017 lecture, so keep your eyes peeled!

5. The subscription is available both as a hard copy and as an e-magazine. Do your readers have a preference, or do they subscribe to both?

We have found that most readers like to have the print editions – the majority take out either a print or print plus digital subscription. We suspect that this is because of the excellent job that our designer does. The magazine is colourful, and printed on glossy paper, so it’s nice to own the print copies. It’s also not so easy to put the digital pull-out poster on your wall!
To see what our print editions are like, readers can request a free copy of our sample issue by getting in touch at editors@babelzine.com.

6. What is Lingo Magazine? Do you have many young readers?

We set up Lingo magazine to cater more directly for younger readers. We had got a bit of experience at producing Babel, and knew that we had plenty of schools among our subscribers, so we thought we would set up something especially for younger readers, with more language puzzles and contributions from young language lovers.
Readers can find out more about Lingo at lingozine.com.

7. What are your future plans? Do you have any projects you would like to work on?

We’d like to see the readership of Babel grow and expand. The magazine is a real labour of love, and we’ve had a lot of kind words from readers and other linguists, so we just want to make more!
We will be continuing to run the annual lectures and competitions, and will hopefully start to have more events where readers can hear linguists in person and tell us what they would like to see in the magazine.
There are now quite a few issues of Babel, so we are also looking forward to launching our new subsciptions and back issues in November. These will make it easier to catch up with particular back issues that catch your fancy, and to have access to the entire Babel back catalogue online.
Readers can follow us on Twitter and Facebook to keep up to date with the latest Babel news!

Thank you for your time, good luck with your future projects.

If you would like to subscribe Babel Magazine, you can do so here.
Interviewed by Bristol Language School.