← Italy: A heaven for ice-cream lovers
Book review: The Atlas of Happiness by Helen Russell →

Jean-Paul Metzger, PhD., is not only a wonderful French language tutor at BLS, but also an experienced translator and a passionate composer. He’s also a bilingual who lives in Bristol, UK, and today we have the pleasure of interviewing him! 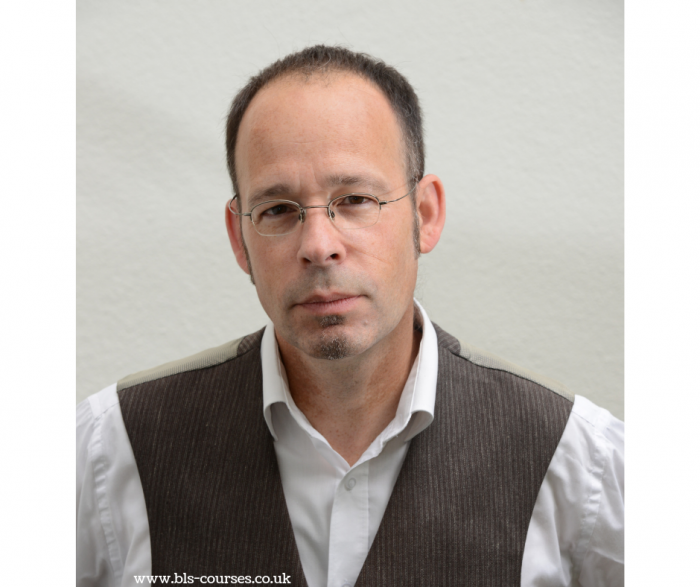 My educational background is rather atypical of that of a language teacher. Back in the late 1980s in France I graduated from university with a Masters in Computer Science; and years later, as a mature student, I went on to do postgraduate studies in music: first at Exeter University, then at Bristol University where I gained a PhD in Composition in 2014. Although French has not come to feature prominently in my education, I have always been fascinated by the word in general, both from the theoretical perspective (linguistics, semiotics, translations studies) and through the appreciation of literature and poetry.

My career choices as a linguist have been very much influenced by circumstances. I became a freelance translator in the 1990s when, at the time a struggling musician in London, I simply had to seek extra work to pay the rent! I went into it completely untrained and was incredibly lucky: immediately after doing a test piece for an agency I started to get regular work and things snowballed so quickly that, within a year or so, translation had become a full-time occupation. And I loved it. It is something that I continue to enjoy doing today, especially since I am fortunate to often get to work on subject matters which are close to my heart – all things to do with music and the arts in general.

Teaching French started in an even more unpremeditated way. In 2001, shortly after I had moved from London to rural Bampton, in Devon, I was encouraged by some members of the town’s twinning association to give a few lessons at the local café, with for sole qualification the fact that I was the only French guy around! Going into it with zero experience, my first class was a kind of happy chaos involving six or seven students of completely disparate levels. But the whole experience proved very exciting and I was hooked straight away. I went on to set up several classes and gradually acquired experience, learning the do’s and dont’s on the job and slowly discovering the many challenges of the profession. I think there is great value in having had such an empirical approach to language teaching – yes, it takes a lot of work, a good deal of trial and error and a few mishaps, but in the end it is an extremely enriching journey and you are indebted to every student you meet along the way for making you the teacher you become. That is a very precious thing.

There are a number of aspects that I find particularly interesting, but one of the most fascinating is witnessing the student’s progress and, with it, how every one comes to gradually adapt and attune what they learn to their own personal style of expression. It is very interesting to see how you can teach the same topic in the exact same way to different people and they all will make something quite different of it. And as a teacher you have to nurture that. In this respect, learning a second language is very much a process of appropriation on the part of the student and I try to stimulate that in various ways – for example, by focusing the attention as much as possible on helping to put right mistakes that hinder the potential to communicate rather than those that simply fail textbook grammatical or syntactical correctness.

Ultimately, and as far as production skills are concerned, it is a matter of encouraging the student not only to speak or write in French but, more fundamentally, to think directly in French – that is, in part, to short-circuit the mental toing and froing between the two languages that is bound to occur in the early stages of learning when either formulating a thought or ‘processing’ what you hear. This is something that, of course, happens very gradually. But there usually is a stage when that firsthand understanding becomes the default mode of perception and the student starts to exploit the language in his/her own individual expressive – and creative – way. It takes a lot of work to get there but it is very much part of the endgame and, after all, what learning a language is all about. Having gone through the process myself when I arrived in England all these years ago helps me to recognise the challenges and difficulties students face throughout that journey.

Preparation work goes chiefly into two areas: structure and content. I don’t use a particular course book and devise, instead, all my hand-outs. Over the years I have built a fairly extensive collection of grammar sheets that I am now able to consistently draw upon; these occasionally get tweaked, or even reworked, in response to specific points that might be discussed in class, but they altogether make up a solid and reliable resource. I have also  assembled a stock of written and audiovisual material, mainly from the French press and television, that I can use to support reading and listening activities. I constantly renew that library by keeping on the lookout for suitable topical material in the media. Part of the preparation work in this particular area consists in editing the material for the class so as to not only ensure that it is adapted to the intended level, but also rid it of potential difficulties that carry little or no pedagogic value.

As for structure, I go into every lesson with a reasonably detailed plan and having established what new knowledge I want the students to go away with. A typical lesson revolves around a ‘technical’ element (e.g., a point of grammar, a specific tense, etc.) and some relevant material intended to help develop oral and/or reading skills. Writing is covered as part of the student’s homework, which is usually directly related to the grammatical topic addressed during the lesson. Any homework is assiduously reviewed in class: that is an important component of most of my lessons and is normally scheduled as one of the opening items.

That said, I am always ready to deviate from any schedule in order to react to questions or requests from the students: questions are no less than the lifeblood of any language class and answering them as they come – and as fully as required – takes precedence over sticking to the script, no matter how far off course it may lead.

That is a difficult one to answer, because we are all very different and each learning journey is motivated by a unique set of circumstances. All a teacher can really do is help and guide and channel one’s skills along the way. But in general I think that it is important to constantly keep in mind that you learn a language in order to communicate and express yourself with as much spontaneity as possible, rather than to produce utterances that are always perfectly right and textbook-like. Try therefore to let the language you learn reflect who you are culturally and draw on the tools you have at your disposal to put your message across – in other words, allow your individual vantage point to shape the way you apply what you learn. That means seeking to find, at whichever level you are and within what you are taught in the classroom, how to effect meaning in a way that feels comfortable and satisfying to yourself. I often encourage my students to use and trust their instinct when, say, they stumble on a grammatical point: what feels right to you will more often than not turn out to actually be correct – or, at  least, correct enough!

For many, however, the most daunting aspect of learning a language is getting to grip with the spoken word in real-life settings. This is often the skill where lack of confidence tends to endure, not least because it is something that you can’t quite test yourself against when not in a genuinely immersive environment. Oral comprehension exercises in the classroom can of course help achieve greater proficiency in that area. But it is also a good idea to create as many listening opportunities as possible for yourself outside the class: casually listen to the radio, for instance, when at home or on the go, even for short periods of time, if only to get accustomed to the overall rhythm and musicality of the language you learn – it is then more about trying to recognise speech patterns and typical formulations (such as those associated with, say, asking a question or punctuating a sentence) than aiming to necessarily understand every word that is heard.

In less specific terms, my advice is to be patient, to not be hard on yourself whenever you get it wrong and to value any steps forward, as incremental as they may seem: they all add up to building a greater empathy with the language you learn.

Teaching French does help… and so does, of course, working as a translator. Not only do these roles keep me in constant touch with the spoken and written word, but they also push me to continually try refining and updating my French lexicon – especially in areas where it evolves relatively quickly, such as new technologies. My translator’s mindset tends to always keep active and I often find myself reflecting on how some wording in English that I happen to come across (say, a slogan on a billboard, a line in a poem, the title of a book) may be translated – or ‘transcreated’ – into French: how to take not just its message but also its undertones, colour, rhythm, from one language to the other. In a headline, for instance, an alliteration will effectively transpose, as a device, into a play on words (“jeu de mots”). This is where bilingualism meets biculturalism – and where it is at its most intellectually enriching: it sometimes feels a privilege to be able to appreciate a novel written in either English or French not only in its original language, but also with all its cultural charge. And that applies, in fact, to virtually all fields of expression, whether creative or not.

Belonging – so to speak – to two different cultures is something that I hold very dear and cultivating that biculturalism, which of course goes far beyond purely linguistic considerations, takes a more deliberate commitment. But that’s another story altogether!

Be attentive to your students and keep learning from them.

Thank you, Jean-Paul, it was great to have you as our interview guest. I want to wish you success in all your professional adventures.