[ssba]
As a linguist, I found your book particularly interesting. Was your work linguistically motivated in any way? Do you have an interest in translation?
That’s lovely to hear, thank you! I suppose in retrospect, the book was linguistically motivated without me necessarily realising—but I think Lost in Translation is often picked up by people with no experience in translation, or people who only speak one language, and it was important to me that the book crossed the boundaries and elusiveness that, for a lot of people, sometimes accompany faraway cultures or languages. It was important that people felt able to connect with ideas that came from a place other than the one they grew up in. My own interest in language and translation really grew alongside the book, because everything happened very back-to-front. I wasn’t planning on writing a book, but after a small blog post I wrote on the topic of untranslatable words went viral, it quickly became the plan—when the universe gives you an opportunity that seems far too good to be true, you take it. 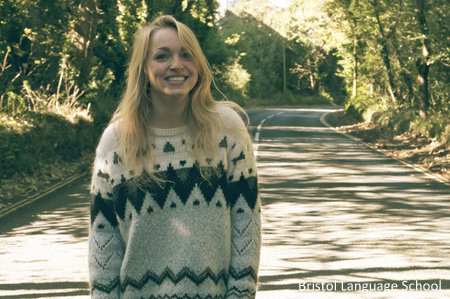 Why did you choose those particular words and languages?
The 52 words in the book were ruthlessly culled from a list of over 200 possibles that I compiled during my frantic research phase (I researched, wrote, and illustrated all the content for the book in less than 3 months). The final words were chosen for various reasons, but most of the time they simply seemed to be universal feelings or emotions, and many had great illustration potential. At one point I wanted to have 52 different languages in the book but ach, German has far too many great ones.
Do you have a favourite untranslatable word?
I think this depends, and changes. A favourite of mine from the book is the Japanese ‘boketto’, which is to stare vacantly into the distance and not really think of much—I find myself in this position far too frequently. A favourite that isn’t in the book is ‘ayün’, a word from the Mapuche language which literally means ‘dawn’ or ‘rising sun’. It equates to ‘love’ but carries all these nuances about illumination and beauty, and also invokes conscious speaking or action—it’s as complicated as it is beautiful.
You call yourself a writer out of necessity and an illustrator by accident. Would you like to expand on that?
A long story cut short, my apparent career as an illustrator was not entirely planned, while on the other hand, I have always written things down on paper—stories, life, people. My need to write often feels much more severe than my need to draw, although over time I’ve found that they complement each other wonderfully… more than I had ever hoped. I feel incredibly lucky to be in this position, where I can practice and develop both my great loves together.
What do you like most about your work? What’s the typical day like for you?
Most of all, I love the flexibility my work gives me in terms of time and location; during the last two years I have lived in Morocco and Switzerland, and have now settled for now in the UK, which is where I grew up. But inks do not travel well on airplanes, and I’ve found this out the hard way, so there are definitely some limitations when it comes to throwing yourself around the globe and keeping your work intact along the way. Sometimes coming and going from the same place is good—I try to note the beauty which lives in the monotony of everyday tasks. As for a typical day, I don’t think there is one. I certainly don’t keep a 9-5 schedule, because some days I want to work late, and other days I want to be up and working before the city has risen. But all days involve some illustration, some writing, some walking, and a lot of tea.
Can you tell us anything about your second book that you’re currently working on?
Well. I can tell you that it will be a companion of sorts to Lost in Translation, and that they will look splendid together on a bookshelf. It’s different, but in a similar vein linguistically speaking. If things go to plan, the book will go to print at the end of March next year, and then will be out in mid-September. I think I’ll allow myself to start getting excited soon.
Thank you.
To follow Ella’s lovely work visit her website.
If you would like to purchase a copy of Lost in Translation, you can do so here.
Interviewed by Alicja Zajdel