One of the most widely-learned and widely-spoken languages in the world is spoken by England’s neighbours across the Channel. Many of us will have learnt some French at school.  The chances are we mostly learnt about France in our lessons.  However, French speakers can be found all over the world, in many countries and on all five continents. With 274 million speakers, French is the 9th most widely spoken language on the planet.  Of those 247 million, 96.2 million are in Africa, making it the continent with the largest number of French speakers, in countries as diverse as Burkina Faso, Djibouti, Rwanda and Morocco.  Many African countries use French as their main international language, as do Vietnam, Laos and Cambodia.  In Europe, French is the 2nd most common mother tongue, and is spoken in Belgium, France, Luxembourg, Monaco, Switzerland, and by some speakers in Italy.  In North America, it is the first language of 7.2 million Canadians and nearly 2 million people in the United States (primarily in Maine and Louisiana).  It is also spoken in Lebanon, and in French overseas territories like Guadeloupe, Martinique and French Polynesia.

French also has an important place in international institutions.  It is one of the official languages of the United Nations (UN), the North Atlantic Treaty Organization (NATO), and the European Union (EU). 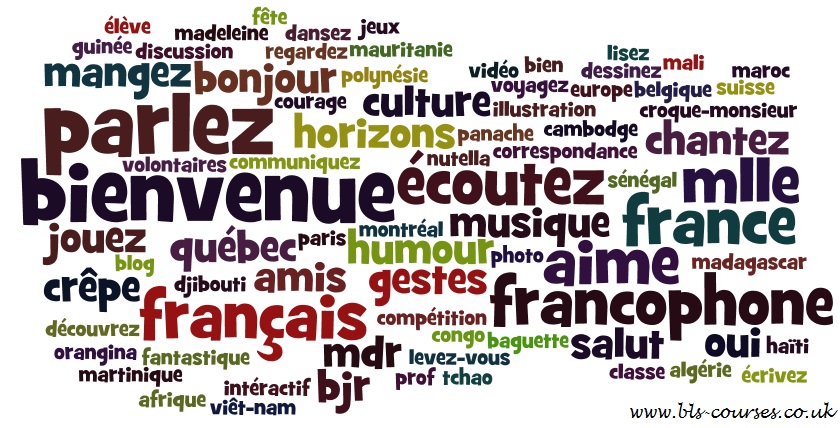 Apprendre le français – Learning French
French is a Romance language.  As such, it is similar to Italian, Romanian, Spanish and Portuguese in its vocabulary and grammar.  Its spelling is slightly more difficult than those other languages though, as it has many homophones (words that sound the same but are spelt differently) and silent letters, and it has a some irregular plurals: plurals usually end in ‘-s’ but they can also end in ‘-eux’ and ‘-aux’ (watch out for ‘cheval’ (horse)-‘chevaux’ (horses) vs ‘cheveu’ (a hair)-‘cheveux’ (hair)).

Grammatical differences between French and English are that French uses gendered nouns, so there are nouns like ‘la voiture’ (the car) and ‘le bateau’ (the boat).  Sometimes, the gender of the word changes its meaning, so ‘la tour’ is a tower and ‘le tour’ is a trip around something (like Le Tour de France).  Adjectives take the same gender as the noun, so ‘the blue boat’ is ‘le bateau bleu’ and ‘the blue car’ is ‘la voiture bleue’.

French verbs take different forms depending on the speaker – these are called conjugations.  English only changes its conjugation for the third person (he, she, it) (I walk, you walk, he/she walks, we walk, you all walk, they walk) but French does this for every person (je marche, tu marches, il/elle marche, nous marchons, vous marchez, ils/elles marchent).

French has some different past tenses compared to English, and two auxiliary verbs, avoir and être, which are used to form the past.  The gender of the person has to agree with être verbs.

Parler français – Speaking French
Because French is found in so many different places, there are inevitably many different varieties of the language. There are differences in words, expressions, pronunciation and even grammar.  This page has some videos that show you the differences. You can choose which variety you would like to learn and find examples of it online to help you practice, or you can watch films or listen to the radio.  A good place to listen to different varieties of French is Radio France Internationale, which has presenters and callers from around the world.

If you want to speak like a native French speaker, the chances are you will need to work on your pronunciation.  The French language has quite a few sounds that do not exist in English, such as ‘ʁ’, the guttural ‘r’, which means that you pronounce ‘r’ with your throat rather than at the front of your mouth, and ‘y’, a ‘u’ sound made with your lips pursed.  You may also notice that French people move their mouths a lot when they speak – this is because it is important to articulate when speaking French.  Practise doing this in front of a mirror – and don’t be embarrassed to do it when speaking in public too!

S’ouvrir sur le monde – Embrace the world
Speaking French gives you access to an array of culture – literature, film, music, history, food, philosophy, art, fashion – from all the different places where French is spoken and allows you to travel the world (all five continents, remember).  It also gives you an insight into international politics and, who knows, might even land you a job in one of the European or international institutions!