← Interview with our French tutor, Jean-Paul Metzger
Book review: The Atlas of Happiness by Helen Russell →

Spring Has Sprung – The Origin of “Spring” in 12 Different Languages

Although we have had some uncharacteristically warm weather recently, the season on its way in March is actually spring, and the observant among you will have noticed the spring flowers starting to poke their heads above the ground.  To celebrate this new beginning, this blog post looks at the word for “spring” and the origins of these words in the languages you can study at Bristol Language School.  This means so you will be able to talk about the new season in your chosen language and impress your speaking partners with your knowledge of etymology, the origin of words.  As usual, the post is arranged by language in alphabetical order. 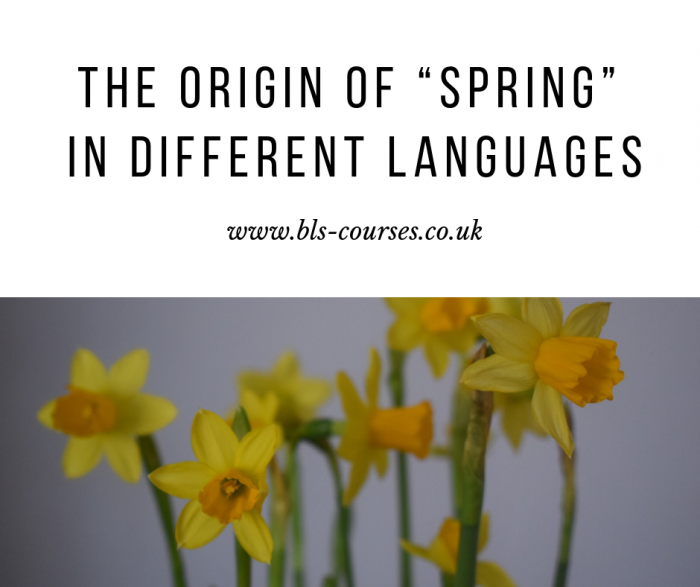 In Czech, “spring” is “jaro”, from the Proto-Slavic forms “jaro”, “jarъ”, “jarь”, “jara”, which in turn come from Proto-Indo-European “yōro-” or “yeh₁ro-”, meaning “year, spring”‎.  It is a cognate with the English word “year”, the German “Jahr” ‎(“year”‎), the Latin “hōra” (“hour, time, season”‎) (and many Romance languages have similar words for this), and the Ancient Greek “ὥρα” ‎(hṓra), meaning “year, season”‎.

Dutch speakers call “spring” “de lente”, which comes from the Middle and Old Dutch words “lentin” or “lenten”, which in turn are from the Proto-Germanic “*langatīnaz”, a compound of “*langaz” (“long”) + “*tīnaz” (“day”).  It is a cognate with the English “Lent”.  Sometimes “voorjaar” is used too, which literally means “beginning of the year”.

The French word for “spring” is “le printemps”, which is from the Old French “printans”, from “prime tans” ‎(“first time, first season”‎), in turn from the Latin “prīmum tempus”.

The Italian term for “spring”, “la primavera”, comes from the Vulgar Latin word “*prīmavēra”, which came from the Latin “prīmus” (“first”) + “vēr” (“spring”).   It is similar in Spanish, Portuguese, and other Romance languages.

The Polish word for “spring”, which is “wiosna”, derives from the Proto-Slavic word “*vesna”, meaning “spring” and coming from the name for the Slavic goddess of spring, birth and renewal.

The Portuguese word, “a primavera” is like the Italian, “la primavera”, which comes from the Vulgar Latin word “*prīmavēra”, made from the Latin “prīmus” (“first”) + “vēr” (“spring”).

The Russian word, “Весна” (vesna) comes from the Proto-Slavic goddess of spring, birth and renewal, “*vesna”.