Talking the Talk: Slang and Idioms Help You Sound Authentic and Understand Nuance

When I moved to France, I thought I could speak French quite well – but, I soon realised that although I could hold a high-brow conversation about politics or recycling, I couldn’t have an informal conversation that would help me make friends!  One of the problems was that I hadn’t learnt any slang and the idiomatic expressions I had learnt were very out of date.  I didn’t have the right vocabulary for informal situations and the register I could use was much too high for conversations with people of my age.  My French was correct but it didn’t sound natural.  I didn’t have the same casual, effortless way of speaking that the people around me did.  We have all heard the expression “to talk like a book” – speaking much too formally for the situation – and we can relate to it.  This is how I felt because I hadn’t learnt slang or idiomatic expressions. 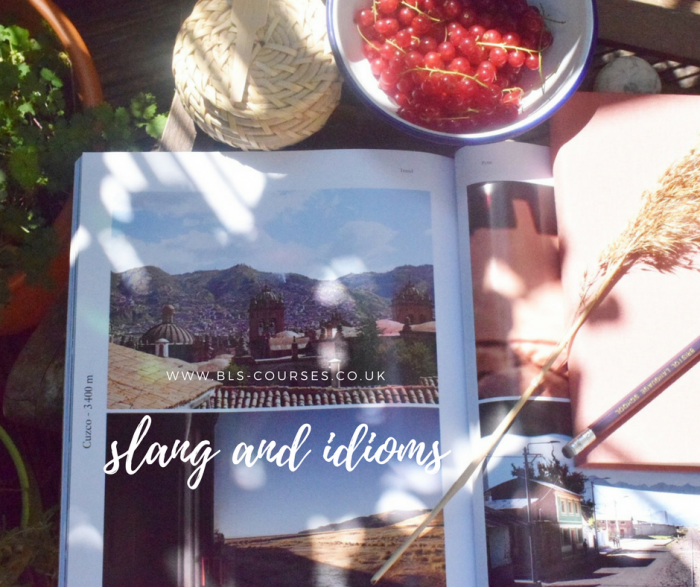 This experience showed me that to be able to understand and produce authentic spoken language and sound like a human, for use in interaction with humans, we should learn and use all registers of language, where they are appropriate, and slang and idiomatic expressions are as important as formal language.  If we don’t learn slang and idiomatic expressions when we are learning a new language, we shut ourselves off from a rich array of meaning and tools we need to really connect with other people.

Not everyone agrees with me, though.  Some commentators think that slang and idiomatic expressions are not that important in language learning, and insist that communication is the most important thing.  I will explore both viewpoints in this article.

Slang is an informal vocabulary that exists alongside formal language.  Slang words take the place of standard words in informal conversation.  Existing words can be used to mean something different, such as “cool” to mean “good” in English, or they can be new words altogether that have the same meaning as a standard term, such as “nosh” for “food” or “bloke” for “man”.  Slang words can be used to express emotion but can also be used as a neutral descriptor in an informal situation.  It is not usually possible to guess what the words mean without learning them.  Slang can start as a kind of secret language within certain group, such as Cockney Rhyming Slang.  Slang can be regional or generational.  It can be short lived – very popular for a short time and then replaced by something else.  Sometimes, though, the slang used by a certain group finds its way into the national language and is understood and used by the majority of the population in informal conversation.

What are idiomatic expressions?

Idiomatic expressions, or idioms, are phrases or expressions that have a figurative meaning. They are usually formulaic, meaning that their form does not change and only that particular phrase has the meaning intended by the idiomatic expression.  They should not be taken literally as their figurative meaning is totally different from their literal meaning.  Some figurative expressions have their origins in a literal practice that has become obsolete.  Examples in English are “to pull the wool over someone’s eyes” (meaning to trick someone or hide the truth from them), “to hear it straight from the horse’s mouth”, (meaning to hear something about someone from that very person) and “to beat about (or around) the bush” (meaning not to address a subject directly).

Why is it useful to learn slang and idiomatic expressions?

Slang is usually seen as being grammatically incorrect.  It breaks the rules that we learn in textbooks.  So why would you want to learn the “wrong way” to use language?

Language researcher Jane Reed, says that slang is used to create a sense of belonging and help create a community.  If you want to be included in conversations between native speakers as an equal, it is very useful to be able to understand and use slang and idiomatic expressions.  Learning slang helps you use language how it is really used by people who speak it.  Informal language develops stronger connections between people.

Slang and idiomatic expressions are also playful, creative and fun to use.  Some expressions are very suggestive, such as “he’s not the sharpest knife in the drawer”, (meaning he is not very clever), or “the elephant in the room” (meaning something that everyone knows about but does not talk about).  That is why slang is used a lot in advertising and literature.  Informal language can help us express emotions that we are feeling in a more “real” way.  A complete understanding of cultural artefacts that express emotion, such as film and music, also calls for an understanding of slang and idiomatic expressions from the period in which they were made.  Expressions used in advertising or literature can even find their way into common parlance.  Anyone who has spent some time in the UK will probably have heard the idiomatic expression “it does exactly what it says on the tin”, meaning that something is obvious.  This comes from an advert that was popular in the 1990s.  Not to mention the array of expressions in English that come from Shakespeare’s works.

Why is it not worth the effort to learn slang and idiomatic expressions?

It is of course possible to have a conversation with someone and be understood without using slang or idiomatic expressions.  Both participants in the conversation can communicate using terms that they share from their knowledge of standard language.  In this way, slang can be seen like a dialect that is shared by a certain group but is not used when members of that group have to communicate using the standard national language.

It is always necessary to have a good basis in the standard version of the language you are learning as you will always be able to communicate.  This is perhaps even more the case if you are learning a world language like Arabic, French or Spanish – there are many regional and national slang or informal words that will not even be known by people from different countries that share the same standard language.

It also depends who you are speaking to as to whether slang and idiomatic expressions are necessary.  If you are at work or at an academic conference, it is probably less likely that you will encounter these types of language forms than if you are having an informal conversation.

If you want to use slang, you must also be careful to use it appropriately and in the right context, to avoid causing offence.  This can be a bit of a minefield.   There can be very subtle differences between when it is appropriate to use informal language and when it isn’t – but native speakers can make mistakes with this too.

Informal language also evolves all the time and certain terms can become outdated, and someone who uses them may sound strange, or even stand out more as a learner of the language.  “It’s raining cats and dogs” is a classic example that is taught to learners of English, but it is rarely used by native English speakers.  It might be less useful to learn little-used informal phrases than it is to use commonly-used, standard terms.

So, what’s the answer?

This excellent article on slang in language-learning (about English-language learning but relevant to other languages too) is a good summary of this topic.

Where can I learn slang and idiomatic expressions?

It is unlikely that you will learn modern and appropriate slang in textbooks classroom settings.  You can increase your knowledge of slang and idiomatic expressions by using language actively: reading fiction, listening to songs, watching films and talking to native speakers.  If at first you do not understand a term that someone is using, you can of course ask them what it means, but it is also a good idea to pay attention to their body language and to the context of the conversation.  Hot English Publishing gives the English example of when you ask your friend what they thought of a film and they say, “It was wicked!”  Even though you know that the standard meaning of “wicked” is “evil” or “bad”, you can see that your friend looks enthusiastic, which will help you realise that “wicked” means “good” in this context!

There are also a number of online dictionaries where you can brush up your knowledge of slang and idiomatic expressions.  Here is a list by language:

Be aware that Spanish is a world language and there will be different slang used in different Spanish-speaking countries:

If you have come across and slang and idiomatic expressions in the language you are learning, please write them in the comments!