← Interview with Family without Borders
Careers Advice: Working as a Translator or Interpreter →

Eric Liu is a monolingual American whose Chinese parents emigrated to the USA and lived there for the rest of their lives. In Liu’s memoir, The Accidental Asian, he presents a series of essays on ethnic identity, assimilation and “Chinese-ness ”. He chose topics that are particularly close to him, to his experience and to his unique family and life situation. 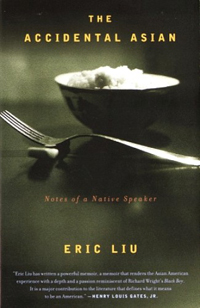 I found the extracts devoted to the Chinese language really fascinating. Eric Liu is not bilingual; he speaks and understands some Chinese, but not fluently. In fact, he expresses his surprise in the book at how little he could understand his Chinese grandmother, Po-Po. We also learn that he is unable to read a Chinese memorial book about his father’s life. I suppose  his complete assimilation had its price: he lost this common skill binding him to his family and ancestors.

I would definitely recommend this book to any parent who is hesitating as to whether to raise their child multilingually and also to anyone who is interested in multilingualism, multiculturalism and “Chinese-ness”.