← Book review: Neither here nor there. Travels in Europe by Bill Bryson
Travelling corner: A day in Manchester →

What’s the first thing you say to someone in any language? It’s usually “hello” – but do you know the deeper meanings behind the ways to say “hello” in your chosen language?  And how do you say “goodbye”?  It’s not always that straightforward and sometimes it is quite poetic!  Here is a list of greetings in the languages you can study at BLS.  You might want to learn another – now you have the first word! 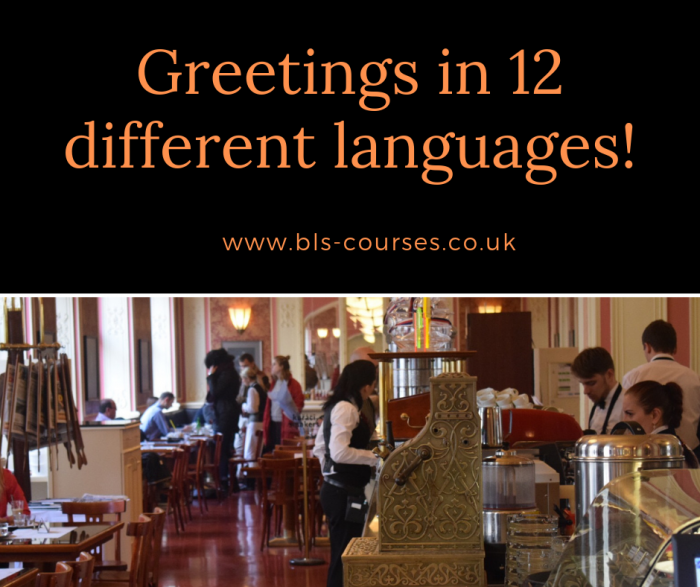 In Arabic, there is a way to say “hello” or “hi”, which is مرحبا  (marhaban),[i] but the most common greeting in Arabic, which also has a religious connotation, is السلام عليكم (as-salāmu ʿalaykum), which is commonly translated as “peace be upon you” or “peace unto you” (“peace be with you” would be ok too but literally “upon” is correct because على (’ala) is “on”).  The response to this is وعليكم السلام (wa ʿalaykumu as-salām), “and upon you, peace”.  This can also be used for “goodbye”.  You can also say “good morning” صباح الخير (sabah alkhyr), “good afternoon/evening” مساء الخير (masa’a alkhayr) and “good night” الخير تصبح (tsbah alkhayr).  The replies are صباح النور  (sabah an-noor) and النور مساء (masa’a an-noor) (“morning/evening of light”).

There are several ways to say “goodbye” in Arabic.  The most common one is مع السلامة (ma’a s-salama) – “(go) with peace/(go) without fear”.  At night, you can say تصبح على خير (tsbah ’ala khayr, literally “(may you) awake to goodness (or health)”).  Another way isوداعا   (wada’an), which is like “farewell” (the reply is the same).   إلى اللقاء (illa al-liq’a), literally means “to/until the encounter,” but is used like “so long” or “until next time”.

The informal way of saying “hello” in Mandarin Chinese is 你好 (nǐ hǎo), literally “you good”.  You should reply with 你好 (nǐ hǎo) to be polite.  The formal way to say “hello” is 您好 (nín hǎo) and is used with strangers, older people or people in authority.  On the telephone, you can say 喂 (wèi).

There are many ways to say “goodbye”, most of which are detailed in this blog post.  We will give you a few of them here.  The most common phrase you’ll encounter is the transliteration of “bye”, 拜拜 (bài bài), which is a very casual phrase.  再见 (zài jiàn) is a more formal way to say “goodbye” but is used less frequently than 拜拜 (bài bài).  It literally translates as “again to see”, so its meaning is closer to “see you again”.  再会 (zài huì) is similar to 再见 (zài jiàn), but is often used in business situations. You can also say 下次见 (xià cì jiàn), which means “see you next time”, 回头见 (huí tóu jiàn), “see you soon”, 明天见 (míng tiān jiàn), “see you tomorrow” and 慢走 (màn zǒu), which is translated as “take care” but the literal translation is more like “slowly leave” or “take your time”.

“Ahoj” is the Czech equivalent of “hi”.  Commentators think it came from English seafarers’ use of “ahoy” as a greeting, and see it as a sign of Czech humour that this word became popular in a landlocked country!  Another word for “hi” is “čau”, which comes from the Italian “ciao” (see below). “Hi” for use with closer friends is “nazdar”, which comes from the phrase “na zdar”, meaning “for luck/success”.  “Zdravím” or “zdravím vás” is a more formal way of saying hello, and it literally means “I greet you”.  “Dobrý den” is also a formal greeting, meaning “good day”.  To say “hello” on the phone, you would use “halo”.

There are a few ways to say “goodbye” as well.  The phrase “Na shledanou”, means “until we see each other again” and is shortened to “nashle” as an informal farewell.  Quite common amongst friends is “měj se”, which is close to “take care” in English.  If you want to say “goodbye” to someone you don’t expect to see again, you could use “sbohem”, literally meaning “with God”.  This may be used ironically.

Dutch has many greetings that often start with “good”.  “Goede(n)dag” is like “good day” in English.  Also used are “goedemorgen” (“good morning”), “goedemiddag” (“good afternoon”) and “goedenavond” (“good evening”).  These are all formal greetings.  They can be made less formal by changing the pronunciation by substituting the “d” for and “i”, making “goeie(n)dag”, “goeiemorgen”, “goeiemiddag” and “goeienavond”.  Other informal greetings are “hallo”, “dag” and “hey”.

Words for “goodbye” differ depending on region.  A shared word is “dag”, which is pronounced with a long “a”.  Belgians often say “da da” or “jo” (“yo”).  “Doei” is used in the Netherlands.  Dutch speakers also have a number of ways of saying “see you again”, which also depend on region.  Belgians may say “tot sebiet” (“see you very shortly”), “tot zo” (“see you then”), “tot binnenkort” (“see you soon”), “tot de volgende (keer)” (“see you next time”), “tot snel”, see you soon (“snel” = “quickly”), “tot ziens” (“until we see each other again”), “tot later” (“see you later”).  Dutch readers please correct me if I’m wrong, but it’s my understanding that “tot sebiet”, “tot zo” and “tot snel” are only used in Belgium but the other expressions are used in the Netherlands.  Another word starting with “goed”, is “goedenacht” or “goeienacht”, and is mainly used to say “goodbye” at night time, or “goodnight”.

“Hello” in French is “bonjour” (“good day”) or “bonsoir” (“good evening”).  “Hi” is “salut”, which is also the word for “salvation” and probably comes from the same root as the Italian “salve” (see below) or the Italian “salute”, meaning “health”.

“Bon après-midi” means “have a nice afternoon” and is used when saying “goodbye”, as is “bonne nuit” (“goodnight”).  “Bonne journée” means “have a nice day” and “bonne fin de journée” means “have a nice rest of your day”.  “Bonne soirée” is “have a nice evening”.  These expressions are not technically “goodbyes” but they are commonly used when taking leave of someone.  French speakers also commonly make reference to the next time you will see the person you are speaking to when saying “goodbye”: “au revoir”, the most common way of saying “goodbye” means “until the seeing again”.  Also commonly used is “à la prochaine”, “until next time” (it refers to the “prochaine fois” (“next time”).  “Salut” is also used to say “bye”.  Some people will say “ciao”, like in Italian, but it is not as common as the other expressions.  If you say “adieu” (literally “to God”, this means that you don’t expect to see the person again but is really reserved for poetry or irony.

To say “bye” “tschüß” is used, which comes from the earlier for “adjüs”, from the French “adieu”.  A more formal farewell is “aufwiedersehen” (“until the seeing again”).  On the telephone, “auf wiederhören” is used, and means “until the hearing again”.

In Italian, “hello” is “buongiorno” (“good morning/good day”) or “buonasera” (good afternoon/evening” (used from 12pm onwards!))  “Hi” is “ciao”, which originates from the Venetian word “s-ciào”, meaning “slave”: speakers would say that they were their interlocutor’s “slave”, to say that they were “at their service” – a gesture of goodwill rather than a literal statement.  (See “Servus” in Polish).

To say “good morning” in Japanese, you would say お早うございます(ohaio gozaimasu), which literally translates as “it’s early”.  The most common greeting in Japanese is 今日は(konnichiwa), used like “good day” or “good afternoon” and short for今日（こんにち）はご機嫌いかがですか (konnnichi wa gokigen ikaga desuka), which means “how do you do today?”.  Good evening is 今晩は (konbanwa) which is like (今日は) but asks “how do you do this evening?”

On the phone, people say申し申し (moshi moshi) when they pick it up. It’s the humble form of 言います(imasu), which is one of the Japanese verbs meaning “to say”.  People often say 失礼します (shitsurei shimasu) at the end of the conversation, which means “sorry for disturbing you”.

To say “goodnight” when you’re going to bed, you would say おやすみなさい (oyasumi nasai).  “Goodbye” is さようなら (sayonara), which literally means “if that’s the way it is”.

In Portuguese, “hello” is “olá” (its etymology is disputed but if you are interested you can look it up and make up your own mind).  “Bom dia” is “good morning”/”good day” and “boa tarde” is “good afternoon”/”good evening”.

Здравствуйте (zdravstvujte) is the most common way to say “hello” in Russian.  It is used in formal situations.  Здравствуй (zdravstvuj) is the informal version of the same word, used with friends or with children.  Both words come from the verb здравствовать (zdravstvovat’), which means “to be healthy” or “to live long”.  Привет (priviet) (“greeting”) is a common informal greeting, equivalent to “hi”.  There are also “hellos” based on the time of day: доброе утро (dobroye utro) “good morning” (used until noon), добрый день (dobryy den’) “good day”/”good afternoon” (used throughout the day) and добрый вечер (dobryy vecher] “good evening”.  There are a lot of other greetings too, which can be found in this blog post. Most people know до свидания (dasvidaniya), but there are other ways of saying “goodbye” in Russian too.  An informal “goodbye” is прощай (proshchaj).  To make this formal or to use it with more than one person, you would say проща́йте (proshchajte).  You can also say до скорого (do skorogo) (“see you soon”) or всего хорошего (voego horosego) (“all the best”), similar to “take care”.

“Hello” in Spanish is “hola”, and like the Portuguese “olá”, its etymology is disputed.  “Buenos días” is “good day”, “buenas tardes” is “good afternoon”/”good evening” and “buenas noches” is “hello” at night time, and “goodnight”.  You can also say “buenas” as a catch-all word for all of these.

Do you have any more to add?  Please put them in the comments!

[i] This word comes from the root ب – ح -ر – RHB (“wide”), and so means something like “welcome to a wide/open place”, implying that “there’s room for everyone” or “you are welcome here”.